This CEO Learned Her Hiring Strategy From Warren Buffett 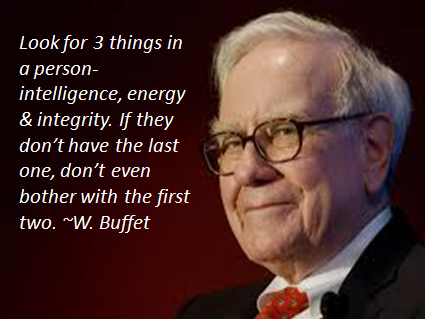 05 okt This CEO Learned Her Hiring Strategy From Warren Buffett

Interviewers are always looking for different things when you’re in the hot seat.

Some want to know that you have the technical skills required by the job, while others want to see that you’re a great communicator or an outstanding team player.

But one CEO says she instead looks for three things that can’t be taught.

In a recent New York Times interview with Adam Bryant, Penny Herscher, the chief executive of business analytics firm FirstRain, said that IQ, integrity, and energy are most important to her when hiring, which, she tells Business Insider, is something she learned from Warren Buffett.

Herscher tells us she learned this principle from a Buffett quote she once read: “Somebody once said that in looking for people to hire, you look for three qualities: integrity, intelligence, and energy. And if you don’t have the first, the other two will kill you. You think about it; it’s true. If you hire somebody without [integrity], you really want them to be dumb and lazy.”

Herscher says IQ is critical in the fact that she wants to hire people who can make good decisions, both on their own or within a team. Meanwhile, integrity is the “life blood of trust” in a company, she says.”If you have trust, teams can make quicker decisions and individuals can be confident in taking the risks necessary to grow the business or to stretch the product,” she says. “But, without integrity in your people, you won’t have trust.”

And finally, growing a company takes endless amounts of time and energy because, she says, of the long days, high stress levels, and constant travel in some cases. “I look for ‘Energizer Bunnies’ in terms of people who can maintain that high level of energy and relentless drive to avoid getting burned out both physically and mentally,” she says.

To figure out whether a candidate possesses these three attributes, Herscher has to be aggressive in the interview by asking very direct questions. “I want to figure out what the person is made of right off the bat, so I will ask them to give me the ‘short version’ of their career path first — this is my first IQ test,” she says.

Many people fail this because they’ll end up talking for 10 or 15 minutes, she says — “They miss the ‘short’ part of the request entirely.”

Next she asks every candidate to tell her about a time in which the candidate failed, why, and what he or she would do differently next time. “Someone who can’t think of a time they failed, or has no weaknesses, doesn’t pass the IQ test.”

Herscher says she’ll also challenge candidates on why they switched jobs (especially if the résumé doesn’t add up). “I test for how they made their decisions to move,” she says. “Were they running to something or from something? Do they trash their prior manager or previous companies? I’m looking for people who managed their choices, moved to grow their skills and experience, and respect the places they have worked and people they have worked for. No company is perfect, and it’s a sign of integrity to me whether the candidate can be fair and reasonable about their past.”

Lastly, she says, getting a sense of someone’s energy can’t be done with a question — “it’s about how they behave in the room.” Are they engaged? Do they lean in to the conversation? What is the pace of the discussion? Do they do extreme sports, or run, or chase young children all weekend? And how do they talk about that? “These are all indications of their energy levels.”

Herscher says if someone is smart, has core integrity, and is willing to work hard, then that person can be successful in her company and can make a difference. “But IQ, integrity, and energy cannot be taught. I believe these are innate attributes found within certain individuals. So if these attributes are not easily noticeable early during the interviewing process, then they most likely won’t be there once the person is on board,” she concludes.