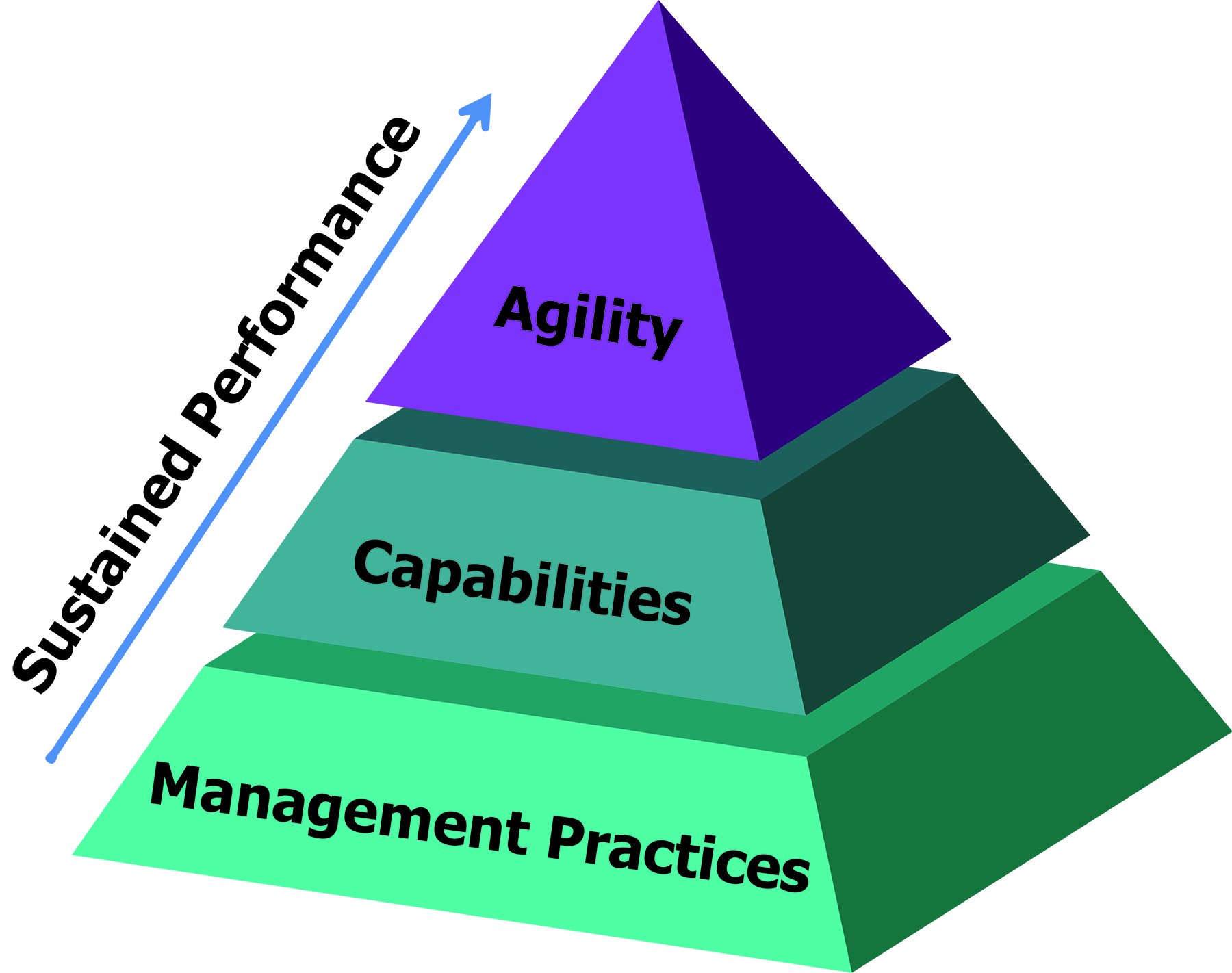 The Beatles’ Sergeant Pepper’s Lonely Hearts Club Band changed the way people think about music; it is regarded as one of the most pivotal music releases of all time. Pop star Phil Collins said that it opened a door and showed people a new room.

But the door had already been opened for the Beatles. Paul McCartney said that the single biggest influence on Sergeant Pepper was the Beach Boy’s Pet Sounds album. The Beatles’ awe of Brian Wilson’s creativity challenged them to match sounds from bass harmonicas, sitars, and French horns to create wholly new musical textures and songs.

I’ve been studying organization change and effectiveness for more than 40 years and recently, the topic of agility has been filling boardrooms, management retreats, and leadership programs. Yet an internet search reflects the confusion over what it actually means. You are more likely to get information about dog training and software development than anything related to how organizations can be more flexible, nimble, and adaptable.

To help corral misunderstandings, my colleague, Chris Worley, Tom Williams from Strategy&, and I developed the Agility Pyramid. It helps to explain the success not only of Sergeant Pepper but the Beatles’ long term success. I interviewed Chris about our latest book (The Agility Factor), the Agility Pyramid, and the Beatles.

Ed Lawler: Before we get into the Beatles, can you explain the Agility Pyramid?

Chris Worley: The Agility Pyramid has three layers. Sitting on top of capabilities and management practices, agility is the ability to make timely, effective, and sustained organization changes. It is defined by four routines: the capacity to (1) strategize in dynamic ways; (2) accurately perceive changes in the external environment; (3) test possible responses; and (4) implement a variety of changes. The agility routines help organizations play and win a dangerous game. They help to keep them focused on the differentiated capabilities that drive above average performance today and are powerful enough to find and implement the capabilities that will be needed in the future.

Lawler: Can you apply the top of the Agility Pyramid to the Beatles’ case?

Worley: Strategizing involves creating a climate where shared purpose, identity, and intent can be achieved. By 1967, and in the aftermath of deciding not to tour any longer, the Beatles were trying to figure out how to make a different kind of music within their unique culture, brand, and reputation. In terms of perceiving, they were visiting fairs, small cities (the lyrics to “For the Benefit of Mr. Kite” came from a poster in a small store), and different countries looking for ideas, were clearly paying attention to other artists, and were discussing their ideas with their managers, producers, and each other. Hearing Pet Sounds helped translate that intent into reality. To get Sergeant Pepper done, they had to test out and experiment with a variety of ideas and ultimately implement and execute the ones that worked. Thus, all four of the routines of agility were in play, and in The Agility Factor, we found that when organizations have 3 or 4 of these routines, they were 7 times more likely to post above average profitability over long periods of time.

Lawler: The Agility Pyramid suggests that there is more to sustaining high performance than just the four routines. Right?

Worley: Absolutely. In the middle layer of the pyramid, capabilities describe what an organization can do, and what differentiates agile firms is that they can change their capabilities when and where it creates a performance advantage. At the risk of oversimplifying, if an organization can do things better, faster, or cheaper than their competitors, it is able to achieve above average performance. Even in the early days, the Beatles’ playing, singing, performing, and managing was better than average.

Sergeant Pepper required The Beatles to develop new capabilities. They learned new skills. George Martin, the group’s producer noted that, “When I first met them, they really couldn’t write a decent song. The best they could give me was “Love me Do.” And yet, they blossomed as songwriters in a way that was breathtaking.” They also developed new ways of working. Paul described the shift from creating just another catchy single to packaging a set of ideas into an album. Finally, they had to learn to do all this in real time. It required lots of practice along with a fair number of both small and large failures. That’s how you build new capabilities.

Lawler: But when organizations are successful, there is a strong motivation to protect their way of working from imitation or to defend a competitive advantage. Did the Beatles ever fall for that?

Worley: No, they didn’t. In the case of music, many bands with a successful sound hurry to make the next album. More often than not, such a move generates short term benefits but the band ends up in a same sounding rut. The cruel joke is that in attempting to preserve an advantage, organizations, like musicians, often overcommit to a recipe and doom their future. Before Sergeant Pepper there was Rubber Soul and Revolver; after Sergeant Pepper there was The Beatles (White Album) and Abbey Road. The Beatles never let success get in the way of changing.

Lawler: At the base of the pyramid, you list management practices. How do those relate to agility?

Worley: Setting goals, developing budgets, and rewarding people, these are things that both agile and non-agile organizations do that support the effective execution of their capabilities. But in agile firms, there is an important twist in the way these systems are designed. Goal setting occurs more frequently, incentive systems more flexibly reward execution, change, and the right kinds of behaviors, and resource allocation more flexibly balances short and long term horizons.

Traditional organizations, with their annual budgets, annual performance appraisals, merit-based pay systems, siloed structures, and hierarchically-defined leadership, not only constrain the ability of the agility routines to shift capabilities, they make everyday changes difficult. Innovation, experimentation, and responses to market opportunities can be held hostage to an annual timetable and “it’s not in the budget” decisions.

The Beatles’ used flexible management practices that changed over time to help them sustain high performance. Their group-based incentives, especially between Lennon and McCartney, spurred creative competition, and although John and Paul wrote most of the songs, Ringo and George penned some classics. Moreover, leadership was diffuse. Each member’s cultural and political views influenced the band’s direction. The ability of agile firms to execute and change their most basic management practices allows these firms to change capabilities and support execution of the routines of agility.

Lawler: Is leadership included in the management practices?

Worley: That’s perhaps the most important one. Agile firms define leadership as an organization capacity, not an individual trait. Good management in agile organization creates a climate where anyone in the organization is capable of influencing change.

Sadly, The Beatles’ arc was short, yet between 1960 and 1969, they produced more #1 hits and sold more albums than any other band. Some of their achievements still stand today. In no small way, they changed the world. The Agility Pyramid helps to explain their success and provides for-profit firms a model for improving their agility.