Lead by Doing, Not by Delegating 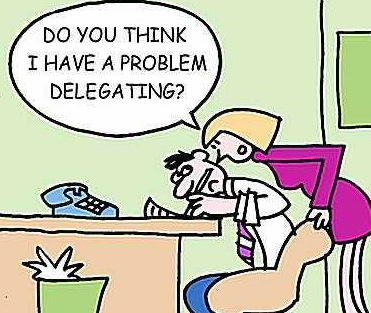 06 aug Lead by Doing, Not by Delegating

It’s just another day in leadership paradise. An important project is languishing—like a bad houseguest, it’s going nowhere, but no one is calling it out. As the head of your team, do you take the matter into your own hands and get the job done, or continue to slough it off on an unfortunate subordinate?

We’ve all been there. Most often, the initiatives that tend to suffer are the strategic initiatives of the important-but-not-urgent variety. (After all, if they were pressing, they’d be on track, receiving the attention they deserve.) Everyone involved is frustrated, especially the rock star assigned to lead the effort. Every status meeting is like a scene from the movie Groundhog Day, with the (perhaps now former) rock star reporting lots of activity (but little progress) and serving up a revised plan with new activities and (extended) timelines. Something has to change. The question is, what?

Let’s consider a real-life situation facing a senior executive: Carrie (not her real name) identified the need for significant culture change within her organization. She delegated the effort to Adam (not his real name), one of her best and brightest, and met with him on a monthly basis to provide direction and input. But after a year of hard work surveying, analyzing, and framing the initiative, Carrie and Adam had generated more paper than progress, and the organization’s top leaders still couldn’t agree on what needed to change or how to proceed.

What’s causing the problem? Carrie delegated a challenge, something she didn’t fully understand, to someone equally clueless. Organizations struggle to manage strategic initiatives because they’re typically broad in scope and scale and full of unknowns, making it difficult to successfully navigate from inception to completion in a straight line. When Adam received the assignment, he appreciated Carrie’s vote of confidence and worked hard to reflect that confidence in how he learned and attempted to lead. Carrie misread Adam’s confidence for competence. Neither one of them knew what they did not know, but assumed the other one did—a classic case of the blind leading the blind.

Professional challenges come in all shapes and sizes, whether they’re related to strategy making, innovation, process improvements, strategic partnerships, mergers, or technology-enabled transformations. When hard problems are delegated and success is elusive, the go-to reaction is to blame the people involved—starting with the aforementioned rock star. But when princes start looking like pigs, leaders should look in the mirror to see the face of the person who is to blame and who should have led the project all along.

Delegating difficult issues is tempting, but it can only lead to disappointment. Leaders shouldn’t assume that all projects can be assigned to others in the same manner. Day-to-day operational work is safely delegated using the traditional methods of assigning accountability, establishing target outcomes, and monitoring progress. But strategic, change-oriented initiatives require hands-on leadership by senior executives who have the passion, perspective, and power to pull it off.

In this instance, executives must truly be leaders, rather than just sponsors. Sponsorship is a watered-down version of leadership, hallmarked by monthly attendance at well-scripted steering committee meetings. Leadership of hard problems is a hands-on, roll-up-your-sleeves, messy job—a set of skills often left behind as executives move up the organizational food chain and away from the day-to-day work routine.

Fortunately, Carrie realized the error of her wayward delegation in time to save the demoralized Adam. She restarted the culture change initiative, put herself in place as the leader, secured expert counsel to provide guidance (for her and her direct reports), and positioned Adam as a staff resource.

According to Patrick Lencioni, leaders like Carrie, who have limited bandwidth, must start by asking themselves what is most important—right now. This singular, temporary rallying cry serves to focus and unify the leader, her team, and, ultimately, the entire organization. By defining the most important strategic initiative for any given period of time, leaders can avoid overwhelming themselves or their organizations with change that cannot be effectively conceived or implemented.

In the world of hypercompetitive market conditions, specialists, and experts, retaining a difficult project can seem a bit counterintuitive. Delegation can be successful when the work is well understood. Otherwise, it’s merely an abdication of responsibility. Don’t fall into its all-too-easy trap. Doing so not only wastes time and money; it also fosters organizational cynicism rather than success.