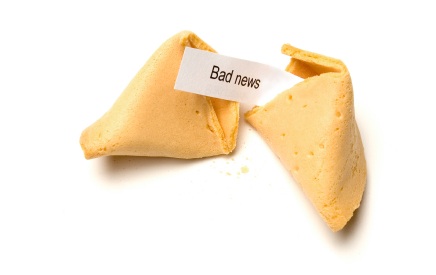 31 jan How to Deliver Bad News Like a Pro

Whether you’re giving an employee a negative performance review or letting them go, follow these tips to help it go smoother.

As a leader, you need to be able to share both good news and bad news effectively. Unfortunately, sharing bad news about an employee’s performance is a major part of running a successful company. If you aren’t comfortable telling someone why you’re pulling them off a project, why they aren’t getting a raise this year, or why their position is being eliminated, the conversation will not go well.

You can’t allow underperformance to linger without getting the employee to supply an explanation and work on making a turnaround. Similarly, you can’t inform an employee that you’ve decided not to give him a raise just by not giving it to him. If you’re the type of CEO who lets things lie or can’t be direct, your team will not respect you as a leader. There’s no room to be meek–you need to make a decision and explain it effectively.

“You need to have the right energy going into something like this. If you’re coming from a place of frustration–which can happen, we’re only human–it will not be a constructive conversation,” Betty Thompson, chief personnel officer at Booz Allen Hamilton, tells Harvard Business Review. “You have to think: ‘What’s the best way for this person to hear the message?'”

Thompson gives the example of when she had to tell an employee his position was being eliminated, and decided to ask him about his frustrations with his role. “I wanted him to look in the mirror, not poke him in the eye,” she tells HBR.

We’ve all had an experience when breaking bad news didn’t go well, but don’t let that cause you to avoid these conversations. Let those bad experiences teach you how not to do it the next time. The goal of any tough conversation is to show respect and be clear and honest. You should strive for “a better outcome: less pain for you, and less pain for the person you’re talking to,” Jean-François Manzoni, professor of human resources and organizational development at INSEAD, tells HBR.

Check out the tips below to help you successfully communicate unpleasant news.

It sounds silly, but lying to your brain can help you convince yourself that what you have to communicate isn’t going to be difficult. If you label a conversation “difficult” from the start, you’ll build it up too much. The more negative hype you generate in your mind, the more nervous you’ll be and the longer you’ll put it off. Once you know it’s time to have a conversation with an employee, start by “framing it in a positive, less binary” way, Manzoni says. Adds Holly Weeks, the author of Failure to Communicate: “A difficult conversation tends to go best when you think about it as just a normal conversation.”

Don’t use a script

This isn’t a play, so don’t try to write a script. The conversation will most likely not follow an arc that you brainstormed, and that will leave you unprepared for when the employee says something you weren’t expecting. “It’s very unlikely that it will go according to your plan,” Weeks says. Instead, your strategy should be anchored by a “flexible” mindset, and you should prepare and think about “a repertoire of possible responses,” she explains. Your communication should stay “simple, clear, direct, and neutral.”

Be open and see the other side

You need to be able to see the other person’s perspective. There are always a few different viewpoints, and if the problem is big, there will be more. If you don’t know the employee’s perspective, you need to ask for it and acknowledge its legitimacy. “Express your interest in understanding how the other person feels,” says Manzoni. He says you should process those feelings and look for common ground between your perspective and theirs.

Be compassionate, but not emotional

Whatever you do, do not portray emotions or play the victim during these conversations, Weeks says. If you’re giving a negative performance review or taking someone off a project, remember that you need to be able to work with this person and you need to preserve the relationship. “It might not necessarily be pleasant, but you can manage to deliver difficult news in a courageous, honest, fair way,” Manzoni says.